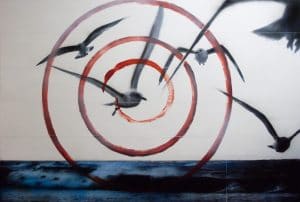 Today, April 20th marks the 8th anniversary of the BP operated Deep Water Horizon oil rig disaster.  At approximately 9:45 pm CDT, “high-pressure methane gas from the well expanded into the drilling riser and rose into the drilling rig, where it ignited and exploded, engulfing the platform.”[1][2]   For 4 months, 4 weeks and 2 days, releasing 4.9 million barrels (210,000,000 U.S. gallons over an area of 2,500 to 68,000 square miles spreading throughout the Gulf of Mexico and leaching into estuaries, fouling beaches and waterways and killing thousands of species of marine life.

This is a familiar photograph to collectors and followers of my work, I’ve printed the photograph in both vintage silver print and digital formats.  I’ve used the image in combination with others in my photo montage collections and as this photo mixed media piece ‘Dead Water Horizon’

The photograph was taken on the beach across the street from my studio on Siesta Key in 1978.  I was fooling around trying a new process of shooting Tri-x and developing the film with Dektol which is actually a print developer.  Using Dectol brought out a nice grainy quality to seagulls and the overcast day.

In the summer of 2010 while hundreds of gallons of crude oil were still pouring out of the hole in the ground created by the explosion, I started ‘Dead Water Horizon’.  Using software to enlarge digital prints without much loss in image quality, I printed twenty-four 8” x 15” sections to create the 48” x 60” piece.  Each print was printed on larger paper so I could deckle the edges.

Each print was set in place adhering the prints to birch substrate with gel medium.  After fully dried, I started working the image with acrylic paint and medium, charcoal and pencil.  The next step was to free hand the deep red circles.  I didn’t want to mask it off and make it a bulls eye, that would be too obvious.  I wanted to do it more free hand trying to mimic a serpent.  I finally decided to use a push pen in the center of the piece, tied string to it and a brush on the other end.  I dipped the brush and made three circular strokes, the last inner stroke finished with what could be thought of as possibly a bird or snakes head.  The piece was finished with multiple coats of acrylic varnish.

I Am A Recipient of the Creative Pinellas Professional Artist Grant Award. Past Images Have Achieved New Identities