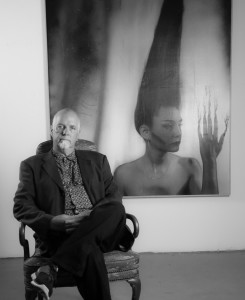 Michael Dennis Conway started shooting in the late 60’s in a traditional way: set the F/stop and shutter speed, compose through the viewfinder and shoot. His interest in enhancing photographs started early on as well, hand tinting with Marshall’s photo oils was one of his first approaches.  While working in the print department at the Ringling Museum of Art in the late 70’s, Conway was introduced to the work of Jerry Uelsmann. Uelsmann’s work was something Michael had never seen before; using multi image, multi layered negatives to produce thought provoking and surrealistic photographs.

Through the 80’s Conway continued to explore other ways in which traditional photographs could be used as the starting point for different ideas. David Hockney’s photo collages were inspiring. The idea that a fine art photograph did not have to be confined to the edges of a single sheet of paper changed Michael’s perspective on the medium and motivated him to again explore the idea that photography could be used in different ways rather than the traditional single image print.

In early 2000 Conway was introduced to Doug and Mike Starn’s large, distressed photographs. Their work was an epiphany; the idea that beauty could be seen in that which may not be considered traditionally beautiful. Michael later found out there was a word in Zen for that, Wabi-Sabi.

Conway’s subject matter can range from outdoor landscapes to portraiture to manipulated images of people, places, objects or surreal nude settings. For over a decade he has focused more and more on photo montage and photo mixed media; using his photographs as the basis for montage prints or single mixed media paintings using paints, wax, charcoal and other mediums. He photographs on location as well as staged sets using wigs, masks and costumes on subjects to enhance the surreal idea he wants to create. Throughout his artistic career, Conway has always used materials at hand to create the image. That approach has changed very little in over forty-five years.

While Michael Conway’s approach has transformed through many evolutions, photography has consistently been the primary vehicle to deliver that vision. Photography has become so flexible and he uses that flexibility to achieve his vision.  He shoots and prints traditional film and silver prints. He shoots negatives and use high resolution scans to work the image digitally. With Lightroom and Photoshop, he manipulate images in different ways. With the evolution of digital printing, he can transfer an image, either to paper or digital film to transfer to another surface to create photo mixed media pieces using paint, charcoal, airbrush, plexiglass or wax.